Students of the Semester

Congratulations to our Students of the Semester in the Day College; Dominique Edwards and Chigozirim Ogbonna! 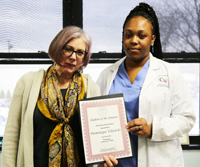 Dominique is enrolled in the Medical Assistant Management, with a 3.98 cumulative GPA. She has earned Dean’s and President’s List recognition since her first semester. Dominique was born in Kingston, Jamaica and attended Excelsior High School. For Dominique, it was difficult choosing a college to attend after moving to a new country. However, Dominique chose CW because of the interest and dedication the college demonstrated throughout her entire enrollment process; she gave CW a chance and, in the same light, CW gave her a chance.  Dominique is expected to graduate in August 2020. She plans on pursuing her Bachelor’s Degree in Nursing, which in time, will lead to her over career goal of obtaining her Master’s Degree in Nursing Practitioner. 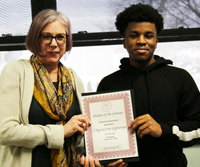 Chigozirim is enrolled in the Information Technology program, with a 3.82 cumulative GPA. He has earned and maintained Dean’s List recognition since his first semester. Chigozirim was born in the Bronx and is the oldest of his two brothers and sister. He attended Columbus High School. After looking at and being to a number of colleges and universities, Chigozirim chose to come to CW because of the fact that the college actually cared about its students. A good environment is important to a student’s success in his opinion. Chigozirim is due to graduate in May 2021. His goal is to make a mark on the technology industry with his creativity.