Day College Students of the Semester 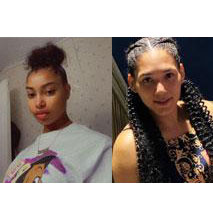 Congratulations to our Students of the Semester in the Day College; Trevonafaith Gordon and Irianni Delgado Vasquez.

Trevonafaith was born and raised in Rockland County and attended Ramapo High School.  She is earning her Associate degree in Medical Assistant Management and will be graduating next April. Trevonafaith chose to come to The College of Westchester because she heard about its awesome medical assisting program and this was the career path she wanted to pursue.  Her ultimate goal is to become a neonatal nurse after she has some experience as a medical assistant. Most recently, Trevonafaith was the recipient of the Honors Program Scholarship from The College of Westchester Charitable Foundation.  She has also been on the President’s and Dean’s list.  We congratulate Trevonafaith on her success at CW.

Irianna was born in the Dominican Republic in a small town called Bonao and came to the United States at age of 13.  She graduated from World View High School with college credits from Lehman College.  Irianni is pursuing her Bachelor's degree in Business Administration fully Online.  She hopes to one day own her own business.  Irianni chose CW because it is small and makes her feel like she’s at home.  She also enjoys having the opportunity to meet one on one with her professors which makes her feel more confident.

Recently, Irianni has qualified to join Sigma Beta Delta Honor Society.  Additionally, several times through her college career, Irianni has been on the President’s list. Irianni is a mother of a three year old, so we admire her perseverance as she goes after her goals and dreams.  We wish her much continued success!