IGTV – The Big New Player in the Media Spectrum 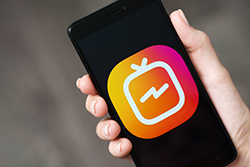 If change is the only thing constant in the world, it’s most pronounced in social media. We’ve seen more communication and media formats come up in recent years than the preceding century. From Facebook Watch to Twitter’s live broadcasts, and most recently, the launch of IGTV, a new app for watching long-form, vertical video from your favorite Instagram creators.

I would say IGTV will soon be the direct competitor of YouTube. IGTV stands for Instagram Television, and it’s a new mobile app set to compete with YouTube allowing content publishers to upload video content up to one hour long. This is 59 minutes longer than the length of videos that can be currently uploaded to Instagram. The ability to upload hour-long videos to a branded channel rolled out gradually with prominent celebrities and social media influencers. It is now available to every user.

How does it work?

As soon as you open the IGTV app, a video will start playing, much like when you first turn on a TV. This means you don’t have to search to start watching content from people you already follow on Instagram. The variety of “channels” in your IGTV depends on the number of people you follow on Instagram. Every person you follow is a different channel. Kevin Systrom, Instagram co-founder said on the Instagram blog that, “when you follow a creator on Instagram, their IGTV channel will show up for you to watch. Anyone can be a creator – You can upload your own IGTV videos in the app or on the web to start your own channel.”

Vertical videos have changed the way in which many of us create and consume content, capturing a large percentage of the video-watching market in the process.

Why IGTV is just a fantastic idea?

First because it follows the vertical format, just the way we all use our cell phones. Second, Instagram priority in starting IGTV is to become a significant player in the video hosting environment. We all know that YouTube has been the king in this regard, remaining untouched atop the mountain after the potential competitors have launched similar products and failed. Creating a video hosting platform seems like the most relevant production extension Instagram can roll out, especially if it wants to pull traffic away from competitive social media platforms. Also, keep in mind that Facebook is the parent company of Instagram, so Facebook will be all in for IGTV.

If you want to know more about IGTV visit this link to access the Instagram Creators Handbook – IGTV.