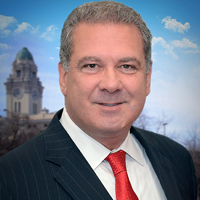 A lifelong Yonkers resident, husband, father of three, and former State Assembly Member, Mayor Mike Spano has dedicated his life to standing up for Yonkers families.

Elected in 1992 as the youngest member of the State Assembly, Spano proudly represented Yonkers for two decades, fighting for students, protecting taxpayers and supporting economic growth. He led the Task Force on Sex Crimes Against Children and Women (SAVE New York), fought for the passage of Megan’s Law, and secured legislation to protect children across the state. He also wrote the language enabling Yonkers to receive a direct portion of revenue from video lottery terminals at Empire City Casino. It was an enormous victory for Yonkers and its public schools, providing $20 million in direct aid annually for education in the city.

Spano helped create the New York State School Tax Relief (STAR) program and Enhanced STAR, and worked with Governor Cuomo to pass New York’s property tax cap, bringing government in line with what taxpayers can afford. He also fought to pass some of the toughest state laws in the nation to protect children against dangerous sex offenders and violent criminals.

Since taking office as Yonkers’ chief executive in 2012, Mayor Mike Spano has led the passage of balanced, bi-partisan budgets, without cuts to services, while leading the charge in rebuilding Yonkers Public Schools. Mayor Spano also launched one of the most ambitious and comprehensive energy plans of any city in the state – Yonkers Green City – saving taxpayers millions of dollars in energy costs, while protecting the environment.

With a strong focus on job creation and economic development, Mayor Spano is leading Yonkers’ $3.8 billion revitalization efforts with innovative new projects that are transforming Yonkers’ growing waterfront, attracting new businesses, tech companies and the arts, and creating hundreds of new jobs across the city. Today, Yonkers is the fastest growing city in the state outside New York City, sales revenues are up, home sales are up and property values are on the rise. Yonkers has recently been ranked the safest city of its size in America and in the Top 100 Best Cities in which to live.

Mayor Mike Spano is committed to securing a strong financial future for Yonkers and building upon its greatest strengths – its location, its history, its pride and its people.