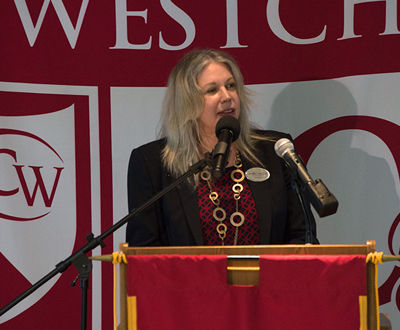 Good evening and welcome to the 10th Annual Scholar Recognition Event!  Thank you all for being here.  I’m Mary Beth Del Balzo, The President of The College of Westchester.  I also serve on the board of the CW Charitable Foundation.  Before we begin our wonderful program this evening, please indulge me as I share a quick word or two about CW:  CW has a rich history as we’ve been in existence since 1915.  100+ years of educating thousands of students who have gone to work in almost every business and hospital in Westchester and the surrounding areas – from Pepsi to KPMG to Krasdale Foods, Montefiore and White Plains Hospital to Datakey Consulting, the Westchester County Association, The Westchester Business Council and many at the College of Westchester itself, and on and on…

Our focus has been steadfast for years and Simply put:  we aspire to be the college of choice for students because we are the college of choice for employers.  We pride ourselves on remaining focused on students and their desire to graduate and obtain or improve upon their current employment situation.  The funds raised through the CWCF allow the CW Scholars to supplement their available funds with scholarships thanks to the generosity of many who are with us tonight.

And the man who made this all possible is my dad, Mr. Ernest Sutkowski, former President, Chairman and Chair Emeritus of CW, as well as President Emeritus of the CWCF.  He sadly passed away on 3/26.  So I couldn’t let tonight go by without recognizing him and his many accomplishments, perhaps most notably his ability to cook a perfect burger and eggs thanks to his stint as a short order cook at his father’s diner when he was just a teenager.

Mr. Sutkowski had a B.S. degree in Business Education from Central Connecticut State University (CCSU) and was a star athlete in baseball, basketball and football, and was elected Sports King by the student body in 1954. He was later inducted into the CCSU Sports Hall of Fame in 1985, and in 1996, received the Distinguished Service Award from CCSU. He continued his graduate studies at Syracuse University, was employed as a Nomenclature Analyst at Pratt & Whitney Aircraft Division of United Technologies and worked evenings as an Encyclopedia Sales Representative for Americana Book Company. Ernie’s tenacity spurred him on to his first job in education as a high school business teacher, coach and part-time radio presenter. He later joined the Gregg Division of McGraw-Hill Book Company and became manager of the private business school department. After McGraw-Hill, Ernie became Executive Vice President of Berkeley College.

But his ultimate passion began in 1973 when he became President & CEO of The Westchester Business Institute, now of course, The College of Westchester.

You can tell that his eclectic career progression was fueled by belief in the power of a practical, focused education as life changing, and his willingness to work to achieve.  Also, his belief in putting students first drove his leadership principles and the CW community continues to embody that philosophy today. Throughout his life he found many opportunities to give back by significantly supporting St Jude Children’s Research Hospital, founding and funding of The Hank Majlinger Scholarship at his Alma Mater, supporting his church, the Several Sources Shelters, The Robbie Zampieri Scholarship at St Anthony’s High School and The College of Westchester Charitable Foundation.

Since his death nearly 3 weeks ago, over $6000 has been donated in his name, which means so much to me and my family.  Thank you to all of you who have contributed, or said a prayer or reached out with a Mass or Sympathy card, or just a kind word.  My family and I are grateful for the caring and friendship of so many.  Thank you.

And thank you for indulging me; my father was a great man and I know he would be so thrilled to meet tonight’s scholars and celebrate their success.  The funds we have raised have helped many deserving students and no matter what I say, the true appreciation and impact of how these scholarships can help change lives can only occur when you hear it directly from the students – that’s why we love hearing their stories.  Now to kick off the event, we have some of our former recipients with us tonight.

Please join me in recognizing:

Now let’s turn our attention to this year’s video featuring some of this year’s recipients.

Doesn’t that truly affirm all the good work we are doing collectively? So thank you.  And a special thank you to our scholars in the video:

And thank you to the team that put together this emotion-invoking piece –Nancy Trim, Brian Trim, and the Media Resources Team.

Lastly, thank you to our CW Charitable Foundation Board Members, as they are truly the core of all the good we’ve done with the Foundation:

Ted Miller and Marissa Weidner, our board co-presidents and our trustees: 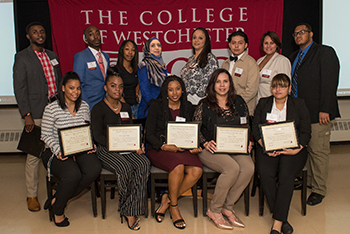 The 2018 Scholarship Recipients are: