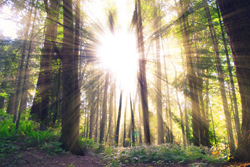 When Memorial Day hits, most of us eagerly plunge into a long-awaited summer mode – beaches, barbecues, and amusement parks. We cannot help but to start savoring summer’s pleasures. But on nature’s calendar the season of summer doesn’t officially start until the Summer Solstice. And from ancient cultures until today, the Summer Solstice has presented a great opportunity to claim nature’s ripened abundance for ourselves.

According to the Old Farmer’s Almanac (2017, para. 6), as the Sun reaches its northernmost point from the equator on the Solstice, it is higher in the sky throughout the day, and its rays strike Earth at a more direct angle. Falling this year on June 21 in the northern hemisphere, this causes the day with the most hours of sunlight during the whole year. In ancient times it was considered a time of fullness of life, worldly blessings, and celebration (Circle-of-Light.com, 2017, para. 2).

For many bygone civilizations such as the ancient Greeks, Chinese, Celtic Druids, and Native Americans, History.com (2013) explained that the summer solstice “was endowed with great significance.” People around the globe commemorated the day with rituals, festivals, and other observances, many of which still survive. The tradition lives on in New York City as this year’s commemorations include a “Mind over Madness” yoga and meditation gathering and the “River to River Festival” of dance, theatre, and music.

Psychology Today has dubbed the Summer Solstice “a supercharged time physically and emotionally, which makes it ideal for making resolutions to kick start new habits, strengthen human relationships, and let go of negativity” (2013, para. 2).  Of course, we could just totally enjoy the beaches and barbecues as well!

First day of summer 2017: the summer solstice. (2017). Retrieved from  http://www.almanac.com/content/first-day-summer-summer-solstice